music and so forth…

A few months ago I got an email from Robert Honstein asking if I would be interested in writing an article about the Fast Forward Austin Festival for New Music Box. This was about as out of the blue as it could have been for at least two reasons:

After an email exchange with Robert and managing editor  Molly Sheridan I said “yes”, dug up a little pocket-sized notebook that my grandmother gave me as a part of a care package when I was in college, 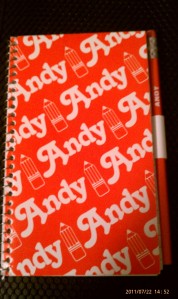 Even the pencil says "Andy"...thanks Baba!

and a few days later found myself at an all-day new music festival. The festival went well and the following week I sent the article off to NMB, which I  promptly forgot about as I entered the final few weeks of the semester. Then in early July I got an email from Molly asking if I’d like to be one of four regional editors for NMB. I was flattered and interested and accepted the offer. I’ll be writing a few stories a month for NMB as well as keeping the New York office abreast of the regional new music happenings around here.

So go to NMB and check ’em out!